The 2021 British Minibike Championship got underway with a two-round bonanza at a well-prepped FatCat Motoparc.

In the Kids Auto class, Jacob Hackett was on fire and scorched to 5 wins from 5 for the overall on both days. Oaklan Winnall turned on the style for second on Saturday, but Alfie Pincher nabbed the number two spot on Sunday with some great riding. Chae Johnson would edge Pincher off of Saturday’s rostrum for third with Pincher fourth, Hayden Kerrigher fifth and Jenson Batner who surprised everyone in sixth having a great day.

The Sunday rundown was Hackett, Pincher, Winnal, Batner, with Zach White in 5th and Kerrigher sixth. Superb racing from these guys. 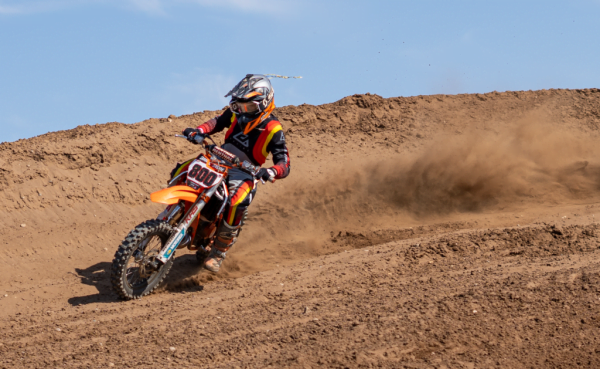 The talent on show in the 65’s is outstanding and Robbie Daly continued where he left off in 2020 by going unbeaten over both days.  On his 65cc debut, Riley Ray Barrow showed his metal with the number two spot on each occasion ahead of Harley Marczak who rounded out the podium both times. Franky Donoghue was the number four Saturday and Sunday with Amon Eschoe fifth at round 1 ahead of Sonny Burton in sixth with these two trading places on Sunday.

The Youth Junior class of 2021 has a different look about it and there is going to be a real fight for the title in it with Saturday winner Hugh Darley and Sunday victor Tyler Griffiths going at it all weekend long. Miley Hodgson and Olly Haynes arent out of the equation either finishing in third and fourth respectively on each day. Behind the front quartet were Jess Cooling and Louie Moss who swapped between fifth and sixth over the two rounds. 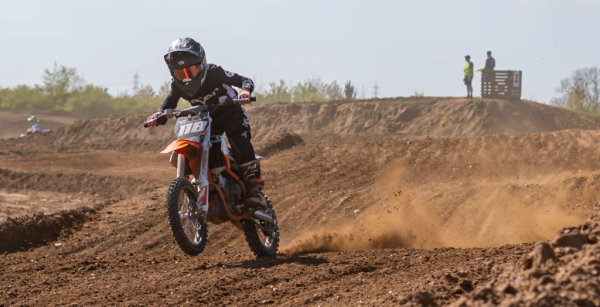 Ben Casey returned to the MBC with a bang rattling off four moto wins with a DNF in the final race of the weekend the only thing to stop him from backing up his Saturday victory on Sunday. Harry Lee, who would finish second on Saturday would take advantage of Casey’s mishap to take the top Sunday top spot. Ethan Lochrie had a 3-2 weekend, nailing a double podium weekend to start off his 2021 campaign. Thomas Hunt was fourth on Saturday and nudged his way onto the podium on Sunday in third. David Maw and Harrison Haslam would round out Saturdays top six while on Sunday Casey would end the day fourth ahead of Haslam and Ben Johnstone.

The Farmbike class is back with a bang in 2021 with an A and a B class needed to field the huge amount of entries in the group. Like last year the racing was epic with the Bayliss brothers of Matt and Chris duking it out with former GP rider Mel Pocock for the bragging rights. Those honours were shared between Mel and Chris, with the former staking his claim to the number spot on Saturday and Chris doing likewise on Sunday with Matt having to settle for third spot on the podium on each day.

On Saturday it was Jordan Booker fourth, Nathan Marsden fifth and Aaron Omahony sixth, while on Sunday it was Marsden fourth, Omahony fifth and Cam Macdonald sixth.

In the Farmbike B group Sam Howland would fend off Alex Dutton and Ricky Collard on Saturday with Flat Track specialist Freddie Hales keeping Dale Howard and Senna Summers at bay for Sunday’s top spot.

Lewis Rose stormed to a complete set of moto wins and the double overall in the SuperStock class ahead of reigning champion Ash Gorman on each day. Jamie Collins looks to have the talent to battle with the front duo and was third on Saturday ahead of Nick Luckman, Luke Walker and Sam Russell. Sunday was a different day though and Walker rose to the occasion grabbing third over Ben Rose, Luckman and Harry Barker.

Jody Burton means business in 2021 and went 1-1-1-1-1 in the Masters class for a twin dose of champagne, Dan Foreman was his closest rival with second in four’s moto and on each day, while current champ Scott Joyner had to settle for the third step of the podium at each round.

Back to his best Chris Rose piled on the points in the Vets class going through the card for victories at both rounds, albeit with a few crashes and was flanked by Nigel Jameson and Jay Taylor on Saturday, and Taylor and newcomer Neil Parsons who showed great speed on Sunday.

Ben Burridge enjoyed taking it to the masses in the new Rookie class and won out on Saturday ahead of 2020 Youth Senior champion Leo Vowles and Shaun Ballard. Vowles returned to the top on Sunday with Pryce Howard second and Burridge third.

Kieran Sembiante took the Pro class by storm pinning reigning Pro Champ Blaine Blackwell back to second on both days. Daniel Fisher, Troy Beck, Harry Streeter, Ben Burridge are all going to be surefire contenders for the title too and on Sunday behind Sembiante and Blackwell, it was Beck who landed the final podium space ahead of Fisher, Streeter and Vowles.

The next round of the series is at the PCE Motopark on the 29th and 30th May. For more info got to >> https://minibikechamps.com/

n fight off Tom Burrill and Phil Thomas for the victory.

For full results from Round 1 go to MYLAPS RESULTS

For full results from Round 2 go to  MYLAPS RESULTS