With the sun shining down, a warm, friendly and supportive atmosphere greeted the riders as they entered the amphitheatre for their first foray into Steel Hawk’s vision. 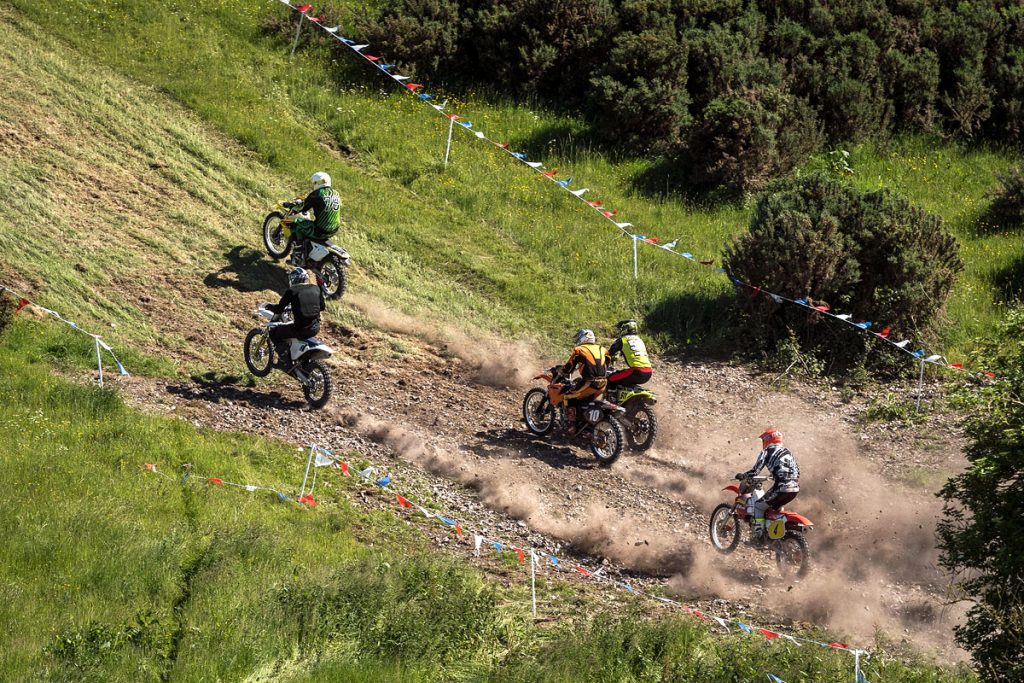 Unlike other hillclimbs, the Helter Skelter, as the name suggests, saw the riders drop off a start platform then power up a super steep hill before spiralling down to the base of the valley, and finishing with a leap over the finish line jump on the adjacent slope.

Any misgivings about the easiness of the course were dispelled when travelling Marshall Dave Wright went through the tapes on the demonstration lap and the steepness and trickiness of the off camber down hills presented themselves for all to see.

After two practice runs each the first 5 riders lined up for the opening race, the 125’s and saw James Ovens defeat young guns Henry Life and Ollie Samways.  This trio were set to go at it over the four heats and with the final cancelled due to an unfortunate incident in the 450 B Final, the result was decided on points. Not only was the bike action great in this class but the bench racing and banter was also top notch and truly in the spirit of the event.  When it came down to it Ovens, the elder statesman of the trio, would claim the bragging rights with Life second and Samways third.

The youngest group of racers the 85’s were up next with each every one of the full five rider line up a hill hero, finishing every race and improving each time on the difficult course.  Harrison Greenough was a class act and would have a been a contender in some of the adult classes based on his race times, while Alfie Ovens finished second over the Luker brothers Jacob and Edward who were third and fourth respectively with Zac Perren in fifth. 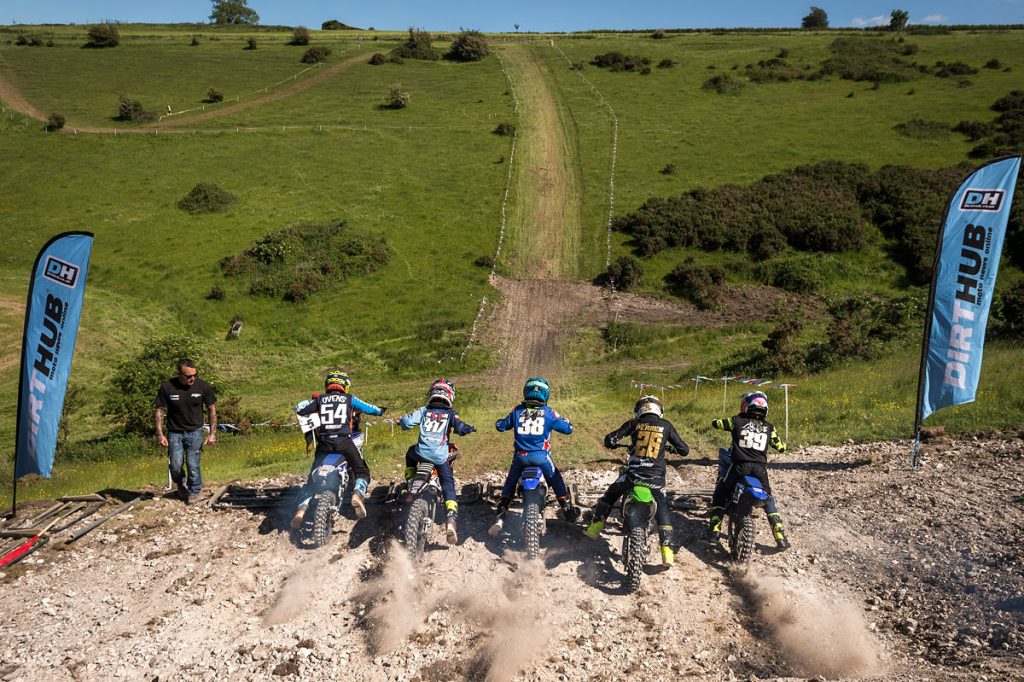 Next in the firing line were the super entertaining Mopeds and Minibikes. Paul Biggs on his Fantic 50 had it dialled, and went through the card in the Mopeds followed by one of the stars of the weekend Pete Hannis (decked out in suit, like Paul).  Obed Cooper with his leg back braking technique kept the laughs and cheers coming in the Minibikes bagging the win ahead of Kayleigh Seward on her c90 contraption who tamed the hill as the day went on. Simon Lancaster was third. 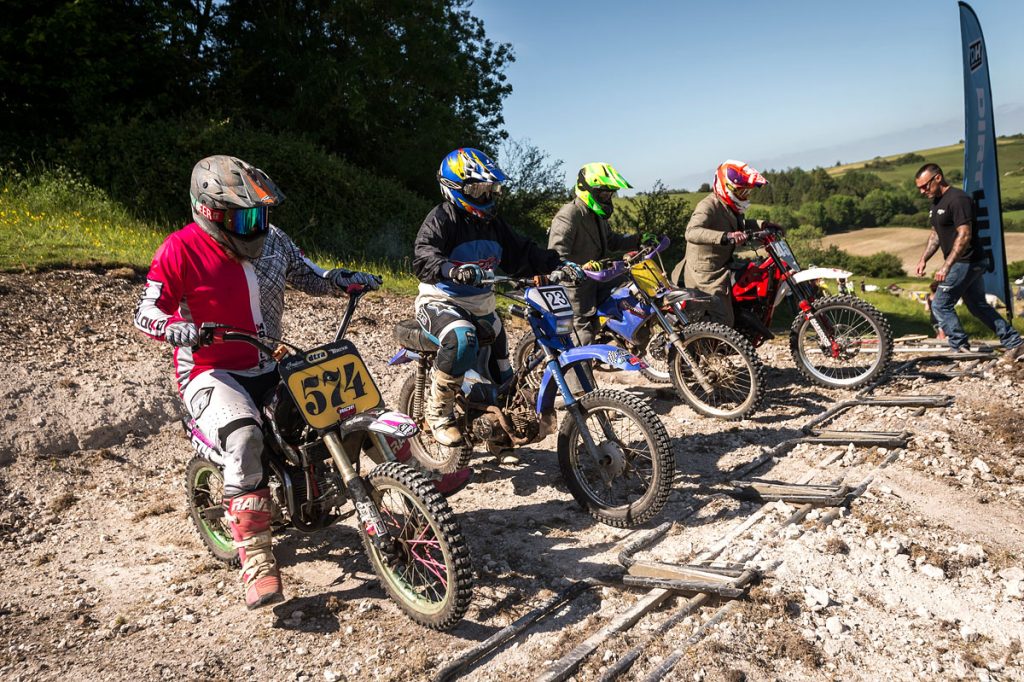 Congrats to these guys as they completed the full course which many on the more conventional machines struggled with.

Lewis Trickett was on another level in the 250 class and was unstoppable but Chris Povey only dropped one point on his way to second with a great performance.  That man Paul Biggs was at it again and nailed another podium finish in third, with Jamie Harvey and Bret Coyne rounding out the top five.

The course took its toll on the Run What you Brung class, but what they lacked in the machinery department they didn’t lack in the fun factor and it was great to see all manor of machines, contraptions and plain craziness.

When it came down to it though Dave Cameron on his AJS was the master pipping Nick Wrixon on his KTM to the number one spot. Paul Gaylard on a stunning Honda CR500 was third. The unnamed rider no 49 was fourth and Pete Hannis on his CBR600 contraption, despite snapping his footpeg and coming down like a sack of spuds was fifth.

Two sidecar machines tackled the course and put on a great show for the crowd with the Paul Pelling/Jack Wilkinson outfit beating Richard and Miles Gilham 4 -1.

In the Big 450’s Guy Chandler and late entry Marcus Clare tied on points and with the final not being run it came down to who had the fastest time and it was Chandler with that honour so Clare was second. Christopher Milliar was third ahead of Toby Morley fourth and local hero Tom Paulley fifth.

All in all it was a fantastic day of racing, fun, frolics and good old fashioned motorcycle banter and chat and plenty of noise and cheers from the Brazilian contingent!

The Steel Hawk Motorcycle Club would like thank everyone who came out to watch and the competitors who totally embraced the event and made the first ever running so memorable. A big shout out to our hard-working crew, both medical and event. We’re a small group but not shy of putting in a shift.

We’d like to say a massive thank you to Martin, Elaine, Brad and Alana Perrett, not only for the use of the majestic Buckland Newton venue but also Brad’s help and hard work in preparing the venue.

Unfortunately one of our hill heroes had a big crash and ended up in hospital. We wish him all the very best in his recovery and hope to see him back with everyone else to take on the hill again next year for more hillbilly shenanigans! We up and running……up that hill!!

Run what you brung